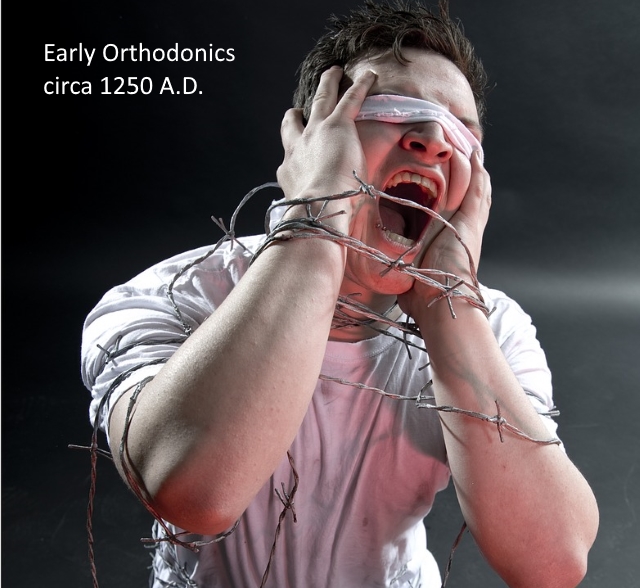 I’ve never had braces to the deep chagrin and envy of my older sisters. And I like to remind them of that – that I both never needed braces and will always be younger.

My daughter is not so fortunate.

Last year we learned she needed braces. Something was mentioned that, left untreated, her incisors would eventually penetrate her hypothalamus or, at best, would leave her comically scarred with her only chance of employment being Snaggle the Saber-Toothed Girl in some obscure Midwestern sideshow.

It was not so much for these reasons that we, my wife and I, caved in and paid for the Othordontists’ new Corvette. Our main motivation was to avoid scathing judgment by other parents on social media. I’m sure they’re judging us anyway, but it’s more subtle and covert now.

I think it would be cool to have a monstrous daughter. I mean, at least I know boys who date her would care about more than her looks, right?

Of course, a part of me wants her to have a normal life. Well, as normal a life as you can have growing up with parents who are prone to have balled-up-sock wars and dance spontaneously in a grocery store aisle sans music.

Normal is pejorative, though. Who wants to be normal? It’s boring, square, and expected. And by square, I do not mean dork-ish or nerdy, I mean boxed. I don’t want to be cool either. Cool, to me, means acting a certain way as to not appear dork-ish or nerdy. I may not be full-blown Nerdish, but I visit the country often and am almost fluent in its tongue.

Where was I? Braces.

Who invented them anyway? If we were to perform an origin study on dentistry, I believe we’d find its roots in the medieval dungeons of the dark ages. Some diabolical and soul-less sociopath, let’s name him Dennis, developed a tooth cage designed to inflict seething pain but only managed to cure crooked bicuspids. Always alert for a money-making scheme, Dennis becomes the world’s first dentist; making a lot of money while indulging his dark desire to hear people scream.

Fast-forward seven-hundred years and they’re now licensed. Why anyone would want to go rooting around in anybody else’s mouth is beyond me. Maybe one time I would if they were choking on the Hope Diamond, but not as a profession.

Because I’m not a dentist, orthodontics are expensive. In the end, my daughter will have perfect teeth to go with her near-perfect vision and best-of-every-trait near-perfect body. Shortly, my mission in life will be threatening to send boys to the dentist.

Saving Time for Retirement (or how life sucks like Target)