Skip to content
Hey! So you want to know more about me and this whole fearless thing? Well…

First and foremost I am a Humble Hubby (husband), a Delightful Daddy, and an Alliteration Aficionado. After that, I’m a writer. I’ve written one novel which is about to be queried (middle-grade fantasy), and am writing a second one still in its infancy–messing its diaper kind of infancy. I’m also a full-time writer. This is my hobby blog, because when I’m not writing I like to write.

I’m also just beginning my journey towards becoming ‘totally ripped’ physically. My definition means the ability to see my own toes.

I thought about starting a blog on personal development documenting my own journey. For the record, I am not at all fearless (hence the quote marks) but, compared to who I used to be, I’m an unstoppable adrenaline junkie, relatively speaking.

Being fearless, means pushing that outer ring of comfort, or as one of my client’s said, “leaning into fear.” It’s like a cold swimming pool: once you jump in it’s never as bad as you thought it would be, and eventually you feel comfortable (about the same time you’re quivering and your lips are the same shade as an imaginary dinosaur).

“Success is to be measured not so much by the position that one has reached in life as by the obstacles which he has overcome.” – Booker T. Washington

Maybe you’re like me: approaching middle-age and still trying to figure out what you want to be when you grow up.

I’ve tried many things. Lost thousands of dollars on various false-starts and half-hearted attempts. I’ve invested in many (too many) self-help programs and books which left me thoroughly confused. I’ve hired a number of coaches, all but one of whom were well worth the money. But if life is a continual process of think, plan, and do, then I was stuck in the endless world of Think N’ Plan. Maybe you’ve visited there or, perhaps, purchased a summer home overlooking the Drifting-Aimless Sea.

I’ve learned a lot over the years. Sadly, I’ve learned just as much about what not to do as I have what to do. If you decide to follow along, endure my arcane sense-of-humor, and can tolerate me being as honest about my failures as I am about my successes, then you might (hopefully) learn to believe you can achieve your dreams too.

Regardless of whether you’re a spring chicken (and a chicken who can read no less) or a person looking into their more seasoned years realizing that they don’t want to end up in that proverbial rocking chair realizing you never lived.

It may have taken a few decades, but I’ve realized that life is out there – out past the dragons and storm-raged seas. It’s there for anyone willing to set their sights, risk getting lost, and take the chance knowing that, as long as you have hope and determination, you will arrive.

The destination may change, but dreams never do. Many destinations can fulfill the same dream. That’s something I wish I learned a lot sooner. 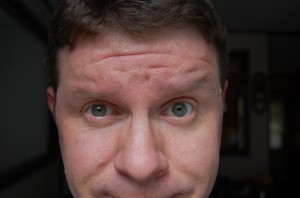 James Cook lives in Massachusetts except when he’s traveling. Then he lives wherever he is.

He is happily married and has a young daughter who is growing much too fast.  He was born at an early age and continues to live as of this writing. When he is not working he enjoys kayaking, hiking, fishing, running, reading, learning, golfing, acting, eating, sleeping, and writing about himself in the third person.  When he is working, he works. He is currently launching a writing and brand consulting business and is working on getting back to his fighting weight of 190 lbs. (though he’s a lover; not a fighter).

43 Completely Random Things About Me